Stroke is the leading cause of death and disability in Western societies after myocardial infarction. Risk factors include hypertension, smoking, diabetes mellitus, hypercholesterolaemia, and genetic predisposition.

In recent years, the traditional conservative approach of IV heparinisation and rehabilitation has been shifted towards active therapies aimed at early the re-establishment of blood flow to areas of ischaemic but non-infarcted brain (ischaemic penumbra) thus minimising the extent of permanent injury. Clot-dissolving agents or thrombolytics can be administered within a narrow time-window after which the risk of intracranial haemorrhage increases significantly.

Our team has played an active role in developing both a practical way of delivering effective acute stroke treatment to the North Western Sydney region but also playing an active role in progressing the research of stroke treatment. It is only in the past few years that we have seen these efforts begin to translate to some patients with the most severe strokes who present to Royal North Shore or Westmead Hospital being treated and in some cases making remarkable recoveries.

Improvements in acute stroke treatment include improved imaging, demonstrating the exact cause of a stroke and also on occasion helping to tell if the stroke signs may be reversible if treated.

Some smaller clots can be dissolved by drugs given in the vein although the larger clots tend to be more effectively treated by using a clot retrieval device. This procedure is performed by our team of doctors as an emergency operation under general anaesthesia. They place a small catheter or tube into the blocked artery and pull the clot out, restoring normal flow to the brain.

The treatment of stroke in the first few hours after onset has therefore become very important to the final outcome. Acute stroke is a medical emergency.

It is not possible to reverse the effects of all strokes. The ongoing neurological care of the consequences of stroke especially in acute stroke units as well as rehabilitation long beyond the acute hospital care remain key to a patients recovery following a stroke. 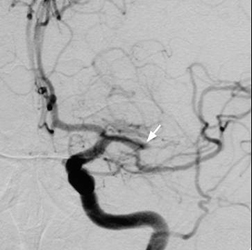 The doctors of SEVS are participating in a trial intra-arterial stroke service at RNSH and Westmead Hospitals. This is for the treatment of patients with acute large vessel ischaemic stroke.

The contact number for doctors referring to this service is 1800 SEVSNI. In addition to a phone call, an information pro-forma is to be completed and faxed to 02 8088 6509.